I think it’s informative to explore the differences between these two projects. 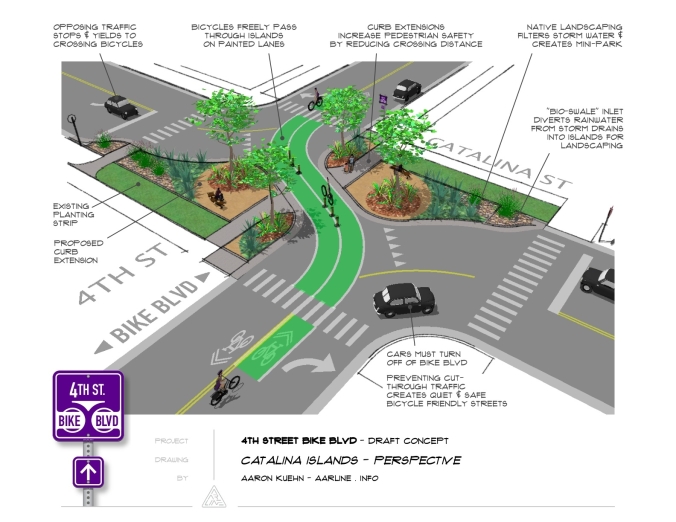 Bicycle activist generated vision for a Bicycle Boulevard diverter treatment at 4th and Catalina. Image by Aaron Kuehn, based on concept by Joe Linton

First, though – what’s a Bike Boulevard? It’s a relatively quiet generally mostly residential street, where bicycling and walking are prioritized. It’s not just for bikes, though, the street is shared by bikes and relatively slow-moving local car traffic, too. Watch this Streetfilm for more explanation on Bike Boulevards.

If you haven’t ridden lately in Long Beach, stop reading, hop the Blue Line and check it out. They’re doing great stuff, and it’s been written about here, here and at L.A. Streetsblog.

When the city of Long Beach decided to create a Bicycle Boulevard, city staff reached out to bicyclists and worked with them to select Vista Street.

Vista Street is residential, two lanes. In the initial phase, sharrows were added. In the second phase, the city of Long Beach planned to add six traffic-calming roundabouts/traffic circles. Long Beach sent out their mobility coordinator, Charlie Gandy, to talk with the neighbors. When Gandy finished talking, the neighbors asked for more traffic calming – the number of circles increased from six to eight! The city added a new signal at the intersection of Vista Street and Redondo Avenue. The new signal only allows bikes to go straight across and diverts car traffic off of Vista.

The project is in. It looks great. It works well. Cyclists and pedestrians use the street, so do cars.

Fourth Street is residential, two lanes. In the initial phase, sharrows were added. In the second phase, the city of Los Angeles came up with some kind of plan… I think… I dunno…  I am hard pressed to find it anywhere on-line. If it exists, it hasn’t been made public… hasn’t been shared with bicyclists.

Here LADOT announces the project on its website (May 2011):

4th Street… Bicycle Friendly Street … will include a large amount of community outreach. Staff is currently developing concept designs for various treatments, and the next step will be to obtain community support for specific projects before moving forward with final design of the first round of treatments.

Then the next thing I heard about the 4th Street project is that LADOT has presented it to Hancock Park homeowner groups… I think – it’s unclear… never announced to my email, and I’m involved and following this. I only know this meeting happened because the aftermath. Here’s an excerpt from a homeowner’s email, forwarded to me by a bike activist whom I trust. I don’t have this person’s permission to print this, so I am not going to name the author:

[…] Adding stoplights at 4th and Highland and 4th and Rossmore is a huge concern in the Hancock Park, Windsor Square and La Brea
Hancock neighborhoods. […] The stoplight at Rosewood and Highland which was installed to aid pedestrians has caused a huge “cut through” problem and Rosewood has become a speedway…not calmer due to that light. […] the plans currently proposed for 4th street have strong opposition.

WTF?!? How on earth did a bike boulevard project turn into the installation of two signals opposed by the neighborhood due to cut-through traffic? I actually really agree with this homeowner’s criticism… one of the most important things about designing a bike boulevard is to make sure it doesn’t result in more cut-through car traffic. How on earth did the LADOT present their still-not-publicly-available plans for these areas in such a way that the neighbors saw them as creating cut-through car traffic? Were the plans bad? Was the presentation unclear?

Last week the second shoe fell. Here’s an email I received from a (sorry again uncredited as I haven’t checked with the sender for permission to quote) bicycle advocate:

[I attended the] Greater Wilshire Neighborhood Council meeting last night [Wednesday September 14th].  Councilmember LaBonge made a surprise appearance and announced that he was not supporting the bicycle crossing lights at Highland or Rossmore.  Furthermore, he stated that the project should be moved to Sixth between Wilton and Fairfax, possibly as a road diet.  […]  Tim Fremaux of DOT stated they would not be pursuing the crossing lights [at 4th/Highland and 4th/Rossmore].  The Hancock Park residents were well represented and submitted over 100 signatures opposing the lights.  The GWNC then approved a motion to oppose the lights.

I wasn’t at these meetings, so I am going to speculate on a couple of causes… this is my guess.

1) LADOT has lost the trust of the public. LADOT has a culture of lying, not sharing information, and foisting unpopular projects announced as done deals. Generally a lot of us cyclists feel like we’ve borne the brunt of this, but most neighborhoods and businesses feel the same way as we do; see the Rick Cole quote at the top of this post. I can completely relate to the GWNC… when LADOT comes into my community with a plan, I am generally inclined to oppose it, solely based on their track record. If the LADOT wants to put a project on a street, it can be assumed that the project will increase cut-through traffic.

2) LADOT doesn’t have confidence in the benefits of bike projects. It may be a bit of a stretch, but, to explain this, I am going to invoke Dan Savage, a great advice columnist. Savage frequently advises folks with sexual kinks to communicate the kinks to their lovers. If feet (or leather or whatever) turn your sexual crank, he advises you to tell your partner, but don’t make it sound like you’re telling them like you have leukemia, make it sound like it’s a fun new Christmas present you’re giving them. So, when LADOT goes into a community and says “we’ve got a bike project on your street,” they can make it sound like “we’re giving your street leukemia” instead of “we’re giving your street a Christmas present.”  LADOT needs to bring on folks like Long Beach’s Charlie Gandy – people who understand the value of bike projects, and who can communicate them with the general public. In some ways this could happen if LADOT chooses to treat L.A.’s bicycling communities (and, frankly, L.A.’s Neighborhood Councils, businesses, y mas y mas) as collaborators instead of as adversaries. That’s easier said than done. It’s going to take real culture change at John Fisher’s LADOT before the department embraces bicycling, walking, and a collaborative community-oriented quality-of-life approach to transportation infrastructure.

Where does it all go from here? I am not sure. It looks like LACBC’s 4th Street Bicycle Boulevard Campaign is reviving and considering our options (to get involved sign up for Google Group here.)

Cyclist on 4th Street in Koreatown

My hunch is that cyclists will need to focus on making the eastern portion of 4SBB happen first. 4th Street has a few apartment-lined miles in Koreatown and Ramart Village neighborhoods – which are much more population-dense and have higher levels of bicycling and walking than the more single-family residential neighborhoods west. I worry that LADOT will pull back the entire project after the drubbing they’ve received at GWNC… so we cyclists need to get out ahead of LADOT in organizing support for the project in Koreatown. Maybe we cyclists can begin to dialogue with GWNC folks, too, whose concerns we share…

30 thoughts on “A Tale of Two Bicycle Boulevards”