seeing is believing - a sharrow on Fountain Avenue in East Hollywood

The city of Los Angeles has finally striped its first set of sharrows. Sharrows – a contraction of “share arrows” – are a standard road marking for lanes that bicycles and cars share. Sharrows show bicyclists where to position ourselves in the lane, and let car drivers know to expect us in the road.

The point at the top of the chevron on a sharrow designates where cyclists should ride safely. Proper placement in the lane keeps bicyclists outside the dreaded door zone.

Sharrows can be used in places where a bike lane is desirable, but road width (and width dedicated to other road uses) prevent 5+feet wide bike lanes. I’ve called sharrows “wimpy” in the past, and I will stick by that. My worry is that the city will back away from more substantive measures and start putting sharrows all over. This concern is evident in that the city’s sharrows pilot reportedly includes sharrows on portions of Reseda Boulevard where the city has already approved bike lanes. The sharrows are a disappointing unapproved step down from the approved lanes.

Theoretically sharrows are a bike measure that can be added quickly, without taking away any space from any other transportation modes.

As far as I am aware, one of the first places in California to begin to test the sharrow marking was San Francisco – probably around 2000 or so. At that time, most sharrows had the bike-in-a-house design, that’s seen in Los Angeles’ 1996 Bicycle Master Plan. In September 2005, California approved sharrows for road usage throughout the state. Read that Caltrans directive here.

The L.A. County Bicycle Coalition, launched a sharrows campaign about 5 years ago. This resulted in Los Angeles City Councilmember Eric Garcetti’s 2008 introduction of a city council motion 08-1723 which initiated a city pilot program.

While Hermosa Beach did over a mile of sharrows on one street for $2,000.00, the city of L.A. lined up an astonishing $100,000.00 for a pilot on ten L.A. streets. Initially the ten pilot streets were publicized.  Then later the pilot was downsized to only six now-secret streets (though they definitely include Fountain Avenue, and I’ve heard that they include Reseda Blvd and 4th Street.)

In a meeting of the city’s Bicycle Advisory Committee, LADOT Bikeways coordinator Michelle Mowery infamously remarked that LADOT couldn’t install sharrows because it wasn’t clear which paint the city should use… and maybe paint would be too slippery. This was exasperating because so many cities up and down the state, and around the world, had already done sharrows and could share such information. Astonishing that the LADOT would be so obstructionist for such flimsy stated reasons.

Nonetheless in January 2009, with funding completely secured, Mowery stated that sharrows were expected to be on L.A.’s streets  by April 2009. Then in March 2009, Mowery announced they would be installed September 2009. Then late 2009, then early 2010. You get the picture.

While L.A. made excuses, other cities (Pasadena, Glendale, Long Beach, Hermosa Beach, etc.) and even a university within L.A. (UCLA) painted their sharrows. Bicyclists on Midnight Ridazz and in Northeast L.A. painted their own do-it-yourself sharrows on L.A. streets.

Finally today, LADOT installed their first sharrows! They’re currently on the eastbound lane of Fountain Avenue – between Western Avenue and Normandie Avenue in East Hollywood. Fountain runs east-west parallel to and in between Sunset Boulevard and Santa Monica Boulevard.

I learned about them from the LADOT’s facutally- and grammatically-challenged Bike Blog, from the LACBC’s blog, and from an email from Eco-Village’s Aurisha Smolarski, who works for the LACBC and who’s put a lot of time and energy into making this project happen. These blogs include photos of Council President Garcetti helping out on the very first LADOT sharrow.

I biked up to Fountain Avenue to ride the new facility this afternoon.

I watched the LADOT’s crews installing the markings. Like most lane markings in L.A. they’re thermoplastic. Thermoplastic is basically a thick opaque melted white plastic. It functions like paint, but lasts longer.

The crews put down a stencil:

Then squirt a rectangle of hot thermoplastic on top of it.

LADOT crew thermoplastic paint machine. Worker in the foreground is holding the stencil down as the thermoplastic machine advances.

They then throw tiny glass beads onto it to make it shinier and rougher.

Then they clear away the excess glass dust. And ouila! we have a sharrow.

They’re pretty nice, and, anecdotally the cars seemed to me to be driving a bit to the left of where they often ride.

I wish I could be more praiseworthy of these… they’re a good step forward, another tool in the toolbox… but it appears to me that they’re not quite installed in the optimal place for bicyclist safety.

When I was on Fountain Avenue, I ran into my friend Stephen Box, L.A.’s most prominent and persistent bicycle activist (read his stuff at SoapBoxLA and Bikeside), and he was scouting out where the new sharrows had been placed. They’re 12 feet from the curb, which places a cyclist a bit further to the right than is optimally safe. Here is a photo of Stephen demonstrating how close the door zone is to L.A.’s new sharrows: 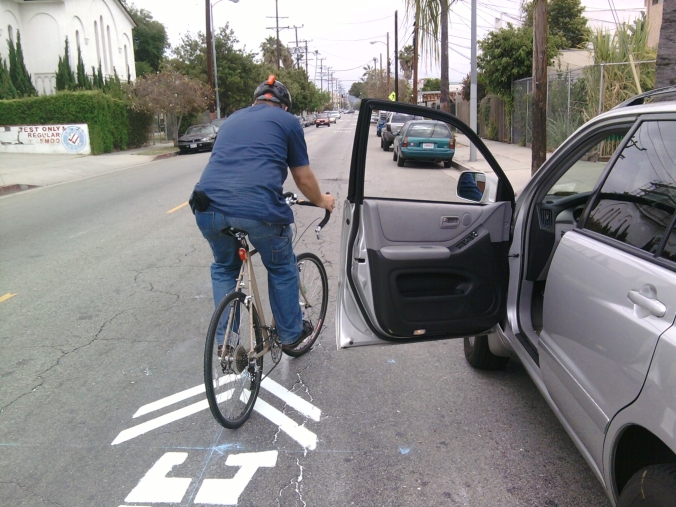 The city of Glendale’s sharrows seem to share this placement – not awful, but a bit closer to the door zone than where cyclists would most safely ride. The legal minimum for California is 11 feet; these are at 12 feet and they do feel a bit far to the right.

It’s a different project, a four-lane street, and a fundamentally life-affirmingly different mind-set, but Long Beach does sharrows best. The centers of their sharrows are located in the very center of the lane. This keeps bicyclists safely well outside the door zone, and makes it very clear that cars and bikes share the lane. When a cyclist travels on the right edge of a non-shareable lane (one that’s not ~14-feet wide), it can invite cars to squeeze past the cyclist fairly tightly, sometimes dangerously, especially for newer riders who might wobble a bit and not tightly hold their line. When the cyclist “takes the lane” by riding in the middle of it, it sends a clear signal to cars behind us that they need to slow down, and to go all the way around us if they must pass.

Congratulations, LADOT on finally getting around to putting down your first sharrows.

One last shot of the LADOT workers making it happen.