Rumor has it that the city's dead bike plan, strangled in its infancy, is buried underneath one of the inappropriate preliminary sharrow Xs painted on L.A. streets.

Yesterday, I had the disappointment of spotting the Los Angeles City Transportation Department’s (LADOT’s) preliminary X markings for placement of sharrows on Fountain Avenue, Vine Street, and Yucca Street. It frankly made me feel frustrated and irritated.

To me, these markings are the first clear on-the-ground indications that neither the LADOT nor Mayor Villaraigosa are committed to implementing the city’s Bike Plan.

I am not going to re-state the entire saga (more detailed rant here), but here’s an outline: On March 1st 2011 (less than 7 months ago) L.A. City approved its Bike Plan which includes what bike facilities get implemented where and when. The approved Bike Plan Five Year Implementation Strategy specifies implementation of 40 miles per year of bike facilities.  Mayor Villaraigosa pledged implementation of 40 miles of bikeway per year; same as in the plan. Then, in late August, the LADOT stated, instead of the approved 40 miles of bike lanes and bike boulevards in the plan, we’re implementing something different: 20 miles of sharrows. Sharrows are the cheapest crappiest bike facility, and studies are clear that sharrows shouldn’t be used where there’s space for bike lanes. Many of the announced sharrow streets are wide enough for bike lanes, and many have bike lanes approved in the Bike Plan, but the city is instead plopping down ill-considered, inappropriate sharrows. (The overall quantity of 20 miles of sharrows in a year is way more than what was approved; the bike plan states only 7.7 miles of sharrows in the first six years of plan implementation.) Summarizing: focusing on sharrows, LADOT is downgrading and delaying the approved Bike Plan, skipping analysis of what facilities are appropriate and safe, and implementing the cheapest and least effective measures to meet the letter of the mayor’s pledged 40 miles.

Despite plenty of feedback from exasperated cyclists, including me, the city is bluntly moving forward with inappropriate sharrows. The city has painted preliminary “X” markings where their inappropriate new sharrows will go. 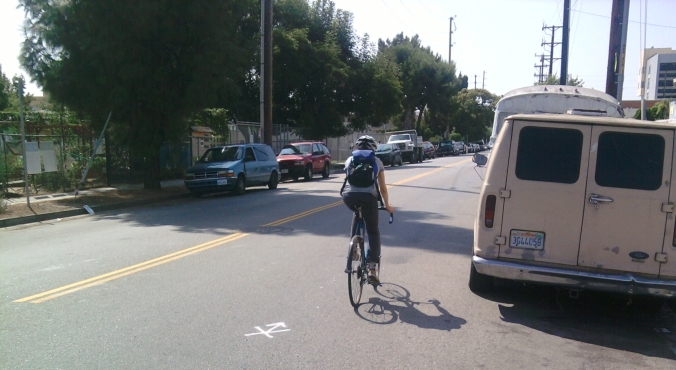 Sharrows that cyclists didn't ask for and that weren't in the Bike Plan may well be coming to Fountain Avenue all too soon. Note the X spray painted on the street.

The Bike Plan designates Fountain Avenue as a future bike lane, not a bike route (sharrows.) Some portions of Fountain are too narrow for bike lanes, hence some of it is appropriate for sharrows, but most of Fountain is 44+feet wide – perfect for bike lanes.

Vine Street is a big wide multi-lane street, where sharrows are unlikely to be at all effective on. Sharrows are reportedly best, even according to LADOT studies, on 2-lane streets; Vine has 4+ lanes.

Even if we take LADOT at face value and assume that there is no alternative and sharrows belong here (I don’t believe that – it’s my summary of LADOT’s justifications), what’s scary to me about this picture is that “No Parking 6pm to 3am” sign. Sharrows are supposed to show bicyclists proper lane placement, including where it’s safe to ride outside of the door zone of parked cars. Sharrows don’t belong on streets with time-based parking restrictions, because, on those streets, safe bicycle lane positioning changes at different times of the day. Placing a sharrow where LADOT has it on Vine is the wrong place to bike from 6pm to 3am. If any of our readers find yourselves riding there and you get run over by a car… well, I’d recommend that you sue the city for putting a sharrow in an unsafe inappropriate place.

And here’s a picture of Yucca Street yesterday:

Yucca Street is 72 feet wide with one through-lane in each direction. The minimum width needed for bike lanes on a 2-lane street is 44 feet, so bike lanes can be added here with relative ease. That LADOT can’t spare 10 feet of Yucca for two 5-foot bike lanes is, frankly, an insult to the safety of cyclists.

LADOT’s sharrow placement is unsafe, too. The sharrow directs cyclists to ride in the central through-lane, but there’s a wide right turn lane (with less traffic) that most bicyclists more commonly ride in; from that lane, cyclists merge onto the striped triangular island near the intersection. Readers: plan to sue the city if you get hit following the city sharrows on Yucca Street, too. (And, as I mentioned here, sharrows with peak-hour parking restrictions on Hoover Street could make that a great lawsuit street, too.)

Mercifully, my travels yesterday didn’t take me to all the streets where LADOT is rushing to add ill-considered sharrows. It makes me feel sad that, so soon after the Bike Plan was approved, the Mayor and the LADOT are so short-sightedly focusing on showing they’re meeting the promised 40-mile goal by implementing inappropriate sharrows, and thereby jettisoning the commitment to bicycle safety that the Bike Plan and the 40-mile promise represent.

Please, Mayor Villaraigosa, implement the Bike Plan. There are many many miles of bike lanes in the Bike Plan that can be done very quickly and very cheaply (as LADOT has been doing wonderfully on Seventh Street, Cahuenga Blvd, First Street and elsewhere.) Don’t settle for inappropriate sharrows. Don’t backpedal on what was approved.