New city bike signs installed at the corner of 2nd Street and Vermont Avenue - right around the corner from L.A. Eco-Village

This post was emailed to me by G.B. Chan, one of Los Angeles Eco-Village’s  residents. I’ve fixed some grammatical errors, but other than that, all the words and links and photos came straight from GB. I haven’t verified the verisimilitude or veracity of all of GB’s claims, but I’d certainly never heard a lie uttered from GB’s lips… and it does seem like these new bike signs are all over!

Pedestrians and bicyclist will by now no doubt have noticed or are noticing new bicycle safety signs installed in the city of Los Angeles. According to the city of Los Angeles’ Green Transportation Commission vice-chair E. Henry Thripshaw, these signs may well be “the city’s [attempt] to validate the importance and validity of bicyclists on the city streets and roads and such.”

According to an unnamed source rumored to be close to people who work for the city, there is speculation that it took mayoral intervention to head off a planned 2-year study of various types of adhesives that might well stand up to the rigors of the region’s rain, snow, and automotive exhaust. The signs were rushed to production through invocation of the city’s obscure Rule 37.02b which has generally only been used to grandfather in unpermitted billboards.

Not all bicycles love the signs. Road Identified Demonstration Advocates for Zoos and Zebras maintains that the city stole their idea. They’re also claiming that the signs, as implemented, serve as a deterrent to bicycling. R-Zebras, as they’re known, claim that prominent use of the word “CAUTION” seems to imply that bicycling is somehow dangerous or daredevil or just plain unsavory. R-Zebra’s cite an obscure Brittish study, suggesting that bicycling is actually safe and healthy and really good for you (those crazy Brits – they don’t even drive on right side of the road!) Among R-Zebra’s list of 14 demands is that the city collaborate with bicycle groups before implementing further signage. R-Zebra spokeswoman Edna Welthorpe states “bicycles deserve all the rites and abilities of drivers.”

In conclusion, Los Angeles’ pedestrians are, though, overjoyed at the signs, though. The city of Los Angeles’ Pedestrian Advisory Committee consultant, speaking on conditions of anonymity required for participation in that committee, stated that “once and for all” these signs “make it clear” that sidewalk bicyclists should pass pedestrians with caution! 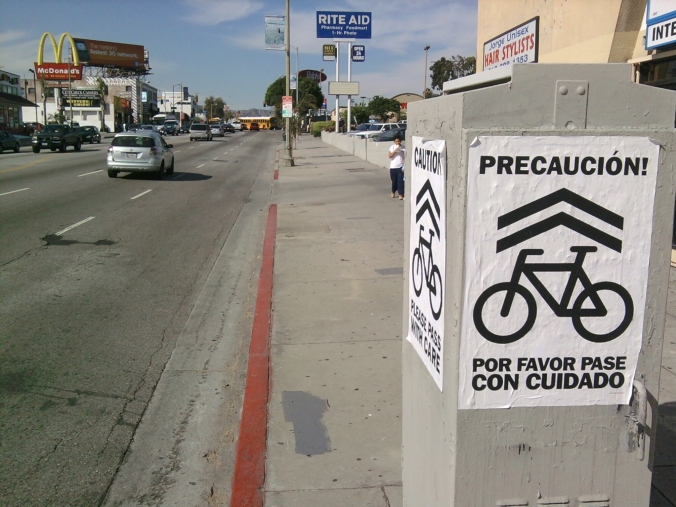 Some of the signs are in Spanglish - Photo by GB Chan 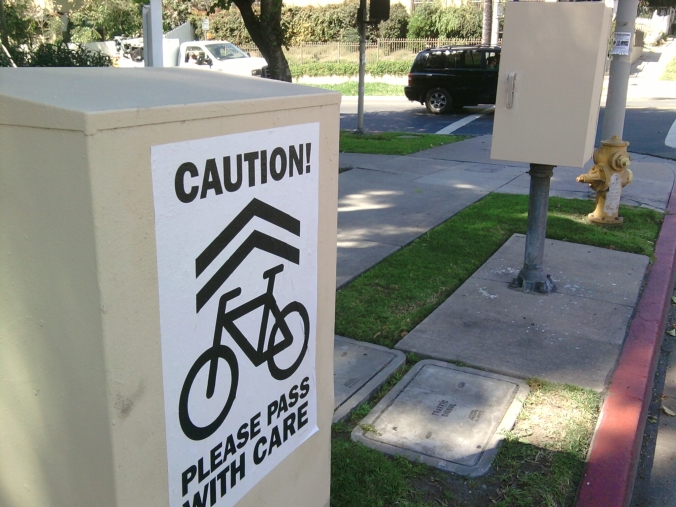 This one was spotted along 4th Street Bicycle Boulevard! Photo by GB Chan

For more coverage of the signs, just bike around Los Angeles looking for them.