A lot of Eco-Village residents use the Wilshire bus lines to get to destinations in West L.A. and East L.A. – I know I do. The city of Los Angeles has been  working with Metro to implement the Wilshire Bus-Only Lane (BOL) Project. The project received federal funding and has been studied and studied and studied some more. Now, that it’s ready to be approved and go out for construction, a couple of groups in L.A.’s Westside are trying to get the project dismantled.

The Bus Riders Union, and many other groups are pushing back on this… and they’re asking for transit supporters to call and email Metro in advance of the Metro Board meeting this Thursday December 9th 2010. They’re also asking supporters to attend the meeting – December 9th at the 3rd floor board room, at Metro headquarters – at the east end of Union Station.

Below is the alert from the Bus Rider’s Union‘s Sunyoung Yang:

EMAIL & CALL MTA TO DEMAND ADOPTION OF THE FULL 8.7 MILE BUS ONLY LANE ON WILSHIRE!!

MTA Director and Supervisor Zev Yaroslavsky is ready to compromise the Wilshire Bus-Only Lanes project by caving to the demand of wealthy homeowners in Condo Canyon to remove their section of Wilshire from the BOL plan. Other groups of wealthy Westside residents have gotten word of this and gone on the offensive against the bus-only lanes project. If the Condo Canyon residents are successful, the domino effect of “Not In My Backyard” opponents could present major problems for this project moving forward. For the full story read here. 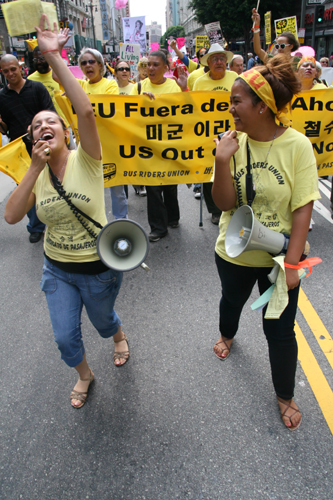 Eco-village resident Eric Romann is a giving a free public talk tomorrow night to introduce folks to the work of the Bus Riders Union. Here’s the information:

For more than 15 years, the Bus Riders Union has organized Black, Latino, Asian Pacific Islander and white working class bus riders to lead the fight for a mass transit system based on civil rights, environmental and climate justice in Los Angeles. The BRU’s historic Civil Rights lawsuit and 10 year consent decree won $2.7 billion in investment in LA’s bus system. Yet today, with global warming and the ongoing air pollution crises requiring a massive shift away from the automobile, Los Angeles — with 7 million cars, still the car capital of the world — remains at a transportation crossroads. With public officials continuing to invest billions of public dollars into wasteful highway and rail expansion projects, the Bus Riders Union offers a visionary model for bus-centered urban public transportation. How can the the BRU’s transit model address civil rights and global warming? How can the BRU’s innovative organizing model help build a revitalized world united front to stop the rising tides of war, racism and imperialism, the ecological crisis and the growing police state?

This interactive presentation and workshop will be led by Bus Riders Union organizer Eric Romann. Eric has been active in movements for racial, economic, gender, environmental and immigrant justice for 12 years and has worked with the Bus Riders Union and its parent organization, the Labor/Community Strategy Center, since 2008. Eric is also producer of Voices from the Frontlines, the Strategy Center’s weekly radio show (Tuesdays at 4pm on 90.7FM KPFK) addressing local, national, and international issues from the perspective of grassroots organizers, social movements, and progressive politics.