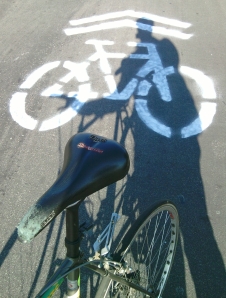 Where do sharrows work best for L.A.?

This article features even more analysis of the L.A. City Transportation Department (LADOT) listing of streets where they’re going to put sharrows. I’ve spent time looking into the specifics of the list, because it seems urgent, so I am not going to dwell too much on the big picture frustration: LADOT shouldn’t be prioritizing sharrows, which are cheap and inferior to the bike lanes and bike boulevards specified in the city Bike Plan.

Instead, here I am focusing on the details of the sharrows list, hoping to head off LADOT inappropriately slapping down sharrows in the wrong places by year’s end.

The story thus far: A week ago, LADOT published a list of 20 miles of streets where they will put sharrows “by year’s end” on “streets that cannot easily accommodate bike lanes.” I responded to LADOT’s list by posting a long preliminary critique here. My sense is that LADOT is attempting to fulfill a mayor Villaraigosa’s 40-miles per year bike plan implementation pledge by implementing the cheapest easiest facilities, instead of those specified in the city Bike Plan. This was pretty much confirmed by LADOT at L.A. Streetsblog, where LADOT is quoted stating:

Some streets that receive the sharrow treatment are too narrow for bicycle lanes such as Fountain [Avenue] and Arden Bl.

So… I figured it made sense to pack my measuring wheel, round up a friend (thanks, Julia!), and bike out to some of these streets and check to see if they are actually “too narrow for bicycle lanes”.

In my earlier post, I stated that, on first glance at the LADOT sharrows list, I thought these eight streets are wide enough to add bike lanes, while keeping all existing car lanes and parking:

Of the other streets listed, all six have significant stretches where LADOT states they’ll do sharrows, but where there’s width for bike lanes. Four of them have stretches where it’s too narrow to easily add bike lanes the entire way.

In San Francisco, where a street (for example Polk Street) varies from too-narrow to wide-enough, the city implements bike lanes where there’s sufficient width and adds sharrows where there’s not sufficient width. San Francisco posts a sign at the interface that says something long the lines of “bicyclists allowed full use of the lane.” The city of L.A. historically hasn’t done this, but should. There’s probably a line to draw somewhere (ie: it’s not worth doing a bike lane for less than half a block of a short block) but I think that LADOT (possibly because they’ve been criticized about 10 years ago for a short bike lane project in Westwood) has thrown the proverbial baby out with the bathwater here… plenty of their sharrow streets have the width to easily accommodate plenty of bike lane mileage. The solution for making these streets safe and comfortable for bicycling will be to to do a mixed facility: part bike lane, part sharrows.

Here are the specifics listed in the order they appear on the LADOT’s list:

Arden Place: This is a one-block street in the Hancock Park area that connects Arden Boulevard with Rossmore (which becomes Vine); it’s next to Christ the King Catholic Church. Though it’s only one block, 0.05-miles long, it’s definitely a useful bike street. It’s also 49 feet wide – so there’s plenty of room for bike lanes.

Yucca Street: LADOT list shows sharrows for the 0.2-mile two-block stretch of Yucca between Vine and Cahuenga, in Hollywood. There’s only one through lane in each direction, and the street is 72 feet wide. There’s a bunch going on there: lots of turn lanes, triangular striped medians, and diagonal parking on one side of the street on each block. Nonetheless, if the LADOT can’t get 10 feet worth of bike lanes on a 72-foot-wide two lane street, they’re not trying… or, actually, they are trying – trying to give it all to the cars.  Basically the easy way to do these two blocks of Yucca would be to combine the bike lane with the right turn pocket. Plenty of room for bike lanes, and implementing them should help the street feel a bit more like a neighborhood retail street than a freeway off-ramp. 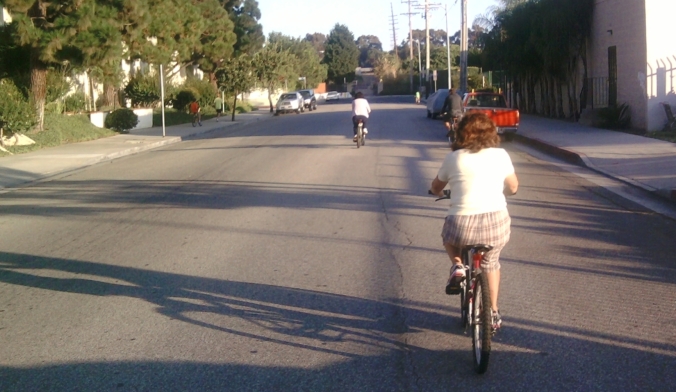 McConnell Avenue: LADOT’s includes sharrows for the 0.3-miles from the Culver Boulevard bike path to the Ballona Creek bike path. McConnell is the first street upstream from the Marina Freeway. It’s a quiet street, residential on one side, industrial on the other. The street is 44 feet wide, the minimum for bike lanes. Anecdotally, last Saturday, there were many more bicyclists (plus pedestrians, and runners, and even dogs) travelling the street than there were cars.

State Street: LADOT’s list has sharrows for the 0.5-mile stretch of State from Chavez to 4th Street, in Boyle Heights. It’s immediately east of White Memorial Hospital and connects with the new First Street bike lanes. State is a very useful bicycling street as it’s one of the few smaller streets to cross the 10 Freeway. The 0.3-mile stretch of State Street from 4th to Pennsylvania Avenue is only 40 feet wide – too narrow to add bike lanes without removing something else. North of Pennsylvania to Chavez, for 0.2 miles, the street widens to 46 feet (and even a little wider at Chavez, where State is 50 feet wide) which is enough for bike lanes. Maybe such a short length wouldn’t seem to be so important, but State Street is a hill. Sharrows would mean than bicyclists pedaling uphill are expected to “take the lane” and share the same space with cars going uphill, which is uncomfortable (even for experienced riders like me) and unsafe. It’s much easier to cyclists and drivers to share a lane  going downhill (where it’s more important to keep faster-moving cyclists outside the door zone). I’ve heard of an asymmetric treatment on hills: bike lane going uphill, and bikes take the lane (sharrows) downhill… though I don’t know of anywhere this has been done. (Can anyone out there give examples? especially ones where merging works well.) So, at a minimum, LADOT should do uphill bike lanes on the hill above Pennsylvania, where there’s plenty of room. My hunch would be to do an asymmetric treatment something like this:

51st Street: LADOT announced 2.6 miles of 51st Street, from Hoover to Long Beach Avenue, would receive sharrows. 51st Street is in South L.A., five blocks south of Vernon Avenue. It’s a smaller street that’s useful for bicycling because it crosses above the 110 Freeway. For the 2.1 miles from Hoover Street to Hooper Avenue, 51st is 40 feet wide – too small to easily add bike lanes. The easternmost half-mile, though, from Hooper Avenue to Long Beach Avenue is 44 feet wide, hence just right for bike lanes.

Colden Avenue: LADOT announced it will add 2 miles of sharrows on Colden Avenue (a street that I confess I hadn’t heard of before the LADOT announcement.) Colden is also in South L.A. not far from the Watts Towers. Colden runs east-west between 95th and 97th Streets, four blocks north of Century Boulevard. From Vermont Avenue to Avalon Boulevard, Colden is mostly 40 feet wide, trunking down to 36 feet at points – not wide enough for bike lanes. East of Avalon to Clovis, for a half-mile, it does widen to 50 feet, easily wide enough for adding bike lanes.

And then there’s a street I missed on my list of eight streets where I initially thought there was sufficient width for bike lanes – Fountain Avenue. Fountain is a designated bike route going east-west from West Hollywood to Los Feliz. It’s a useful smaller alternative paralleling Hollywood, Sunset and Santa Monica Boulevards. East of Western Avenue, Fountain is part of the city’s sharrows pilot. What tipped me off to go out and measure is that Fountain is designated as a “future bike lane” in the city’s recently approved Bike Plan. My expectation was that it isn’t wide enough, but I figured I’d check.

Fountain Avenue does vary, and definitely includes parts that aren’t wide enough for easily adding bike lanes. Fountain also stops and re-starts, so the Fountain bike route jogs south a block including Bronson, La Mirada, and Van Ness, each for a block. Here’s a listing of the widths:

The good news here is that there’s space for very easily-implementable bike lanes on good stretches of Fountain: a half-mile (!) from Vine to Bronson, and a third of a mile from La Brea to Highland. And this is a street that already sees significant volumes of cyclists.  It would be a shame for the city to do sharrows here, where bike lanes are feasible.

That’s all for the street measuring stuff for now. 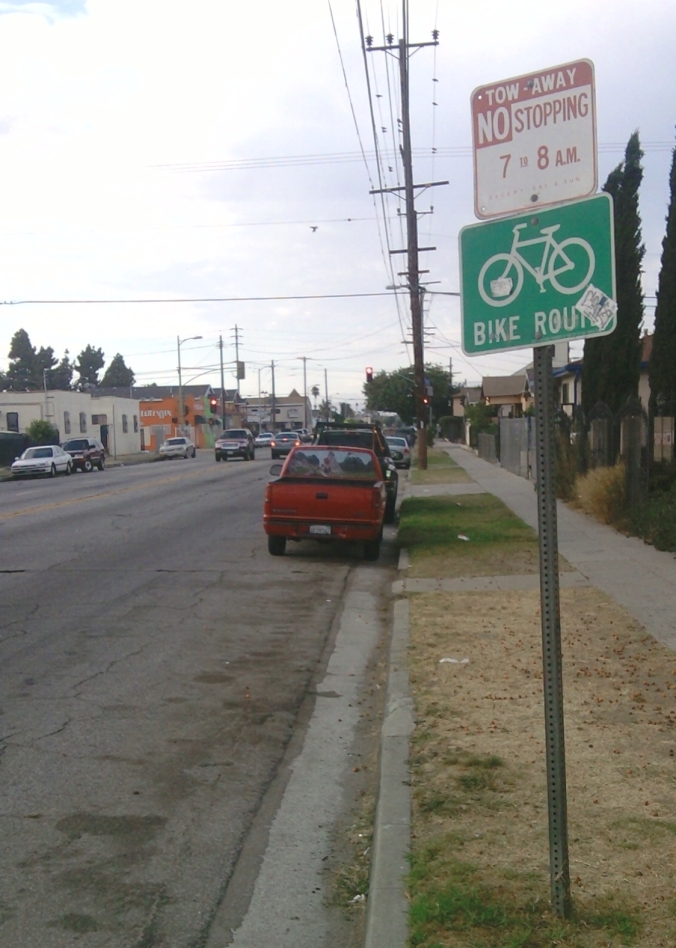 One other thing that I noticed that’s going to complicate LADOT’s sharrows list: peak hour parking restrictions. For sharrows to work, parking needs to hold still. If there’s parking some hours of the day and not others, then the safe lane positioning (that sharrows mark) will vary.

Most of the LADOT list’s 4.4 mile stretch of Hoover Street is designated tow-away no parking from 7am to 8am. A portion of Vine Street (north of Hollywood Boulevard) has parking restricted from 6pm to 3am. Does LADOT plan to remove the parking restrictions? My recommendation for that part of Hoover would be road diet bike lanes.