Both of these bike lane projects are on the Year 0 (2010) list for the Five Year Implementation Strategy list of the award-winning Los Angeles City Bike Plan, approved earlier this year (2011.) They were also both approved in the city’s 1996 Bicycle Master Plan.

Here’s where the new bike lanes are located. Blue is Exposition from Catalina to Harcourt. Green is MLK from Marlton to Rodeo.

I’ll describe the MLK lanes first, then the Expo ones. 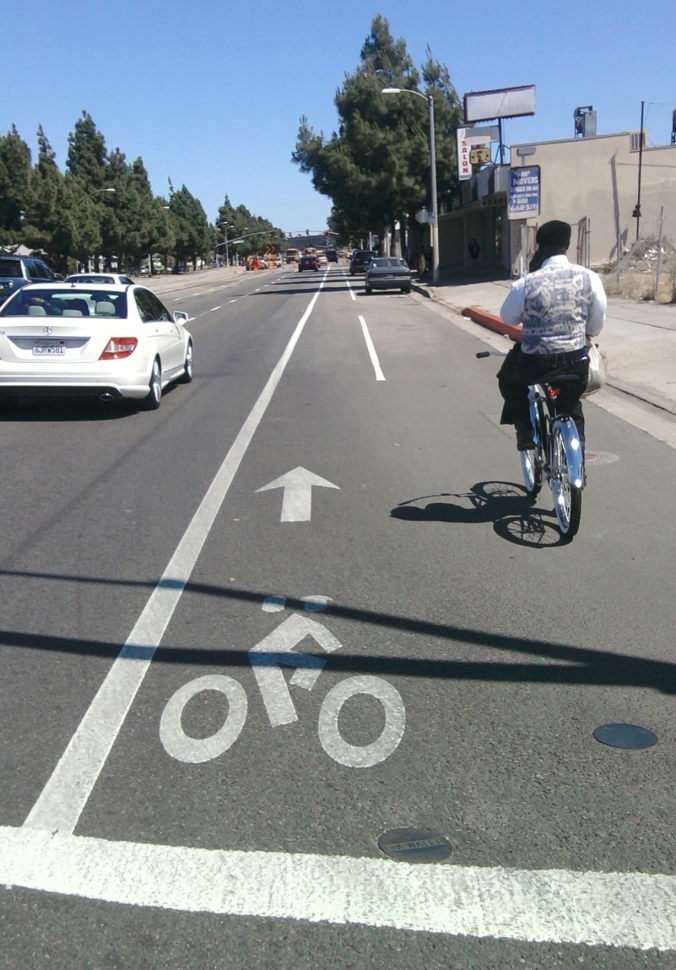 The new Martin Luther King Jr. Boulevard lanes are located just west of Crenshaw Blvd and Leimert Park. The area is historically and currently an African-American neighborhood. This stretch of MLK features a series of large pine trees. I’ve heard TreePeople’s Andy Lipkis describe these trees as a living tribute to Dr. King. TreePeople worked with the community to plant these trees in 1990.

The MLK bike lanes, according to the plan, go 1.05-miles from Marlton Avenue to Rodeo Road… which is nearly the case. The westbound lanes start a bit after Marlton (between Victoria Avenue and Somerset Drive) and peter out a bit before quite getting to Rodeo, due to a long right turn lane… but they’re still right around a mile long.

Martin Luther King Jr Boulevard in this area is quite a large street: 3 lanes in each direction, plus left turn lanes, and even quieter parallel side roads through much of it. It’s a 9-lane road at its widest. Like wide streets all over, on MLK car traffic moves fast, pretty much freeway speeds.

There were definitely plenty of cyclists out riding along MLK on yesterday’s sunny clear Sunday afternoon. Some were using the new lanes, but most of the cyclists I observed rode on the sidewalks and/or on the quieter side roads. 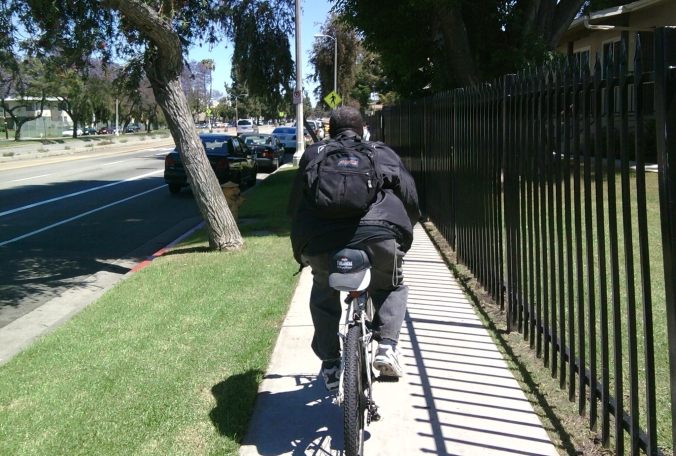 To create the bike lane, the city didn’t need to remove any travel lanes – they merely narrowed the existing travel lanes, and took away portions of a striped median along the raised median. It’s easy to “read” in the street where the lines were erased/scraped:

Note where the former striping was scraped off - it appears as darker gray dashed lines.

The striping is all down, all done. Due to the realigning of the lanes, now the loop detectors don’t match the traffic lanes, so LADOT workers were out yesterday cutting into the street to realign the loop-detectors. 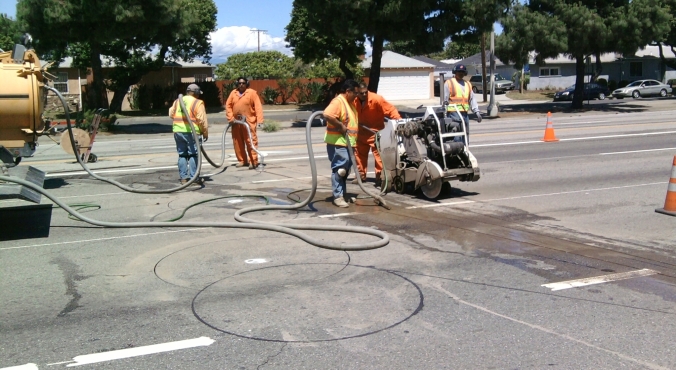 LADOT crew realigning loop detectors. Note the circle in the street in the foreground and how it no longer lines up with the center of the striped travel lane. The new lighter circle is just above the old one.

This stretch of MLK lanes is listed twice in the Five-Year list, with another entry stating that they’ll go from Rodeo to Crenshaw… I think that this means that the lanes will be extended one more block to Crenshaw… soon. Hopefully some day they can extend all the way to the other stretch of  MLK Blvd bike lanes east of the 110 Freeway to Central Avenue.

Exposition Boulevard is just north of MLK. In fact, both of the bike lanes in this post nearly converge at their western ends, located at the north and south ends of Rancho Cienega Sports Center Park (though neither quite connects well with the park… yet.)

Expo includes an old rail right-of-way that runs from the city of Santa Monica to Exposition Park and the University of Southern California and continues eastward to near the city of Vernon. Expo, in case you haven’t heard, is the site of Metro’s newest light rail line under construction for a couple years, with its initial phase expected to open next year – 2012. The Expo light rail line project, which I know about generally but haven’t kept up with in much detail, includes a “continuous bikeway” that’s more-or-less continuous. Ideally it would be continuous… but there are apparently some questions of some unfortunate gaps. I’ll be curious to see how it all turns out.

The rail construction is nearly complete. There are already test trains running. The landscaping is going in. 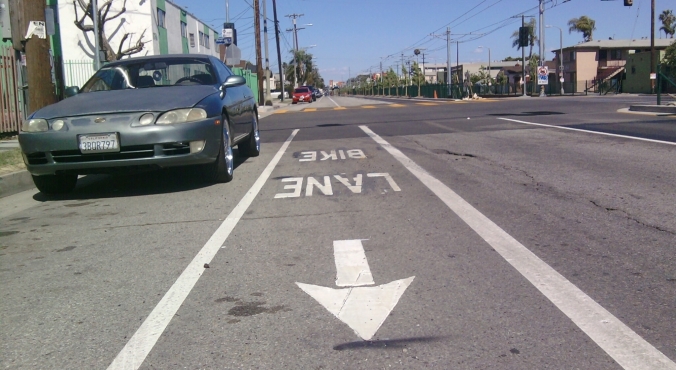 Yesterday, I only explored as far west as La Brea… so there could more bike lanes already done further west. As of yesterday afternoon I was able to ride westbound bike lanes completed from Catalina Street (one block west of Vermont Avenue) to Harcourt Avenue (three blocks east of La Brea Avenue) – totalling 3.3 miles.

The eastbound lanes were complete  from Harcourt only to Rodeo Road (at Grammercy Place.) This is the area where the road is only on the north side of the rail.

With brand new asphalt along the Expo Rail, no adjacent parking, and fewer intersections, the eastbound bike lanes seem significantly more comfortable and faster. The westbound lanes have some stretches with adjacent parked cars and deteriorated asphalt, including potholes. 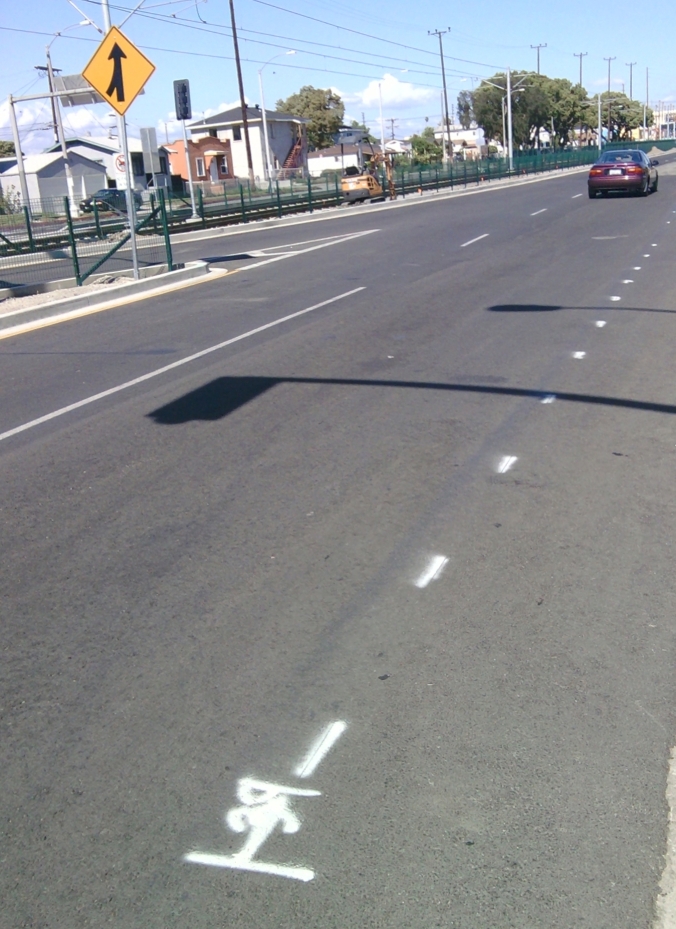 On Expo at Rodeo Road, the eastbound travel lane crosses the rail (more on this below.) So, east of Rodeo, the rail runs in the middle of the street, with car and bike travel lanes on both sides.

As of yesterday, east of Rodeo, there are only some preliminary street markings (see photo), so far. Hopefully this means that  the eastbound bike lanes should be striped soon.

There were only a few cyclists using the new Expo lanes yesterday. It’s still a construction zone in some places, though.

There were some cars parked in the bike lane tow-away zone… which makes me suspect that some parking was removed to create these lanes. This seemed to be true close to intersections only – where an additional left turn lane squeezes out some parking.

It’s not quite complete, so I could be wrong, but there is a point where I think that the eastbound lane might be made safer by using non-standard pavement markings… I know that L.A. is reluctant to do these, but I’ve spent time recently in Long Beach and San Francisco… where these sorts of bike-friendly things are more common.

As I mentioned, the eastbound bike lane crosses the tracks – at Rodeo Road. Though I expect that there may be more coming (ie: a railroad-crossing gate with moving arm that prevents cars and bikes from hitting trains, maybe signs, too), here’s what that looked like yesterday (view from bike lane, looking eastward at crossing): 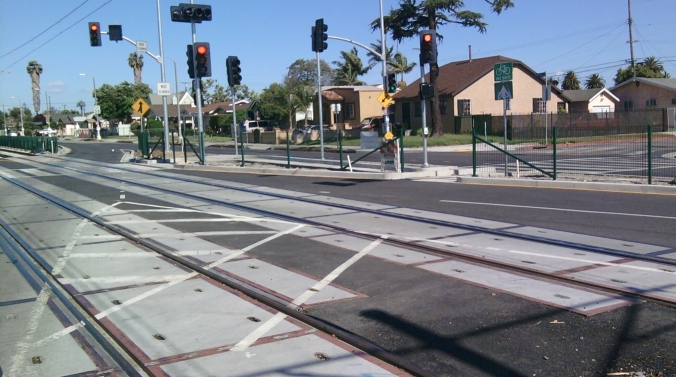 updated May 17 2011 – thanks Mark Elliot for this animated gif that makes the bike trajectory through the intersection clearer:

The car lane is on the left edge of the photo. The eastbound bike lanes, which up to this point have been parallel to the car lane, veer diagonally to the right (keeping to the right of the striped triangle on the right of the photo.) The bike lane goes through the gap in the median island, then the cyclist turns left onto the eastbound lane along the far sidewalk. (ok… this description and photo have to be confusing if you haven’t been there. sorry.)

Many cyclists know how to cross rails – generally as perpendicular as possible, to avoid getting bike wheels caught. But a lot of cyclists don’t know this.

The lines of this intersection look a little tight to me… I think that, instead of a sharp angle that bikes just don’t do (we ride in a curve, of course), it should incorporate a curved trajectory that’s even more perpendicular than what’s on the ground now… Compare with this Streetfilm showing a very good Seattle bike-rail crossing point. It could also include green pavement to draw attention to the conflict, similar to the Long Beach cycletracks, or other treatments used in San Francisco and elsewhere.